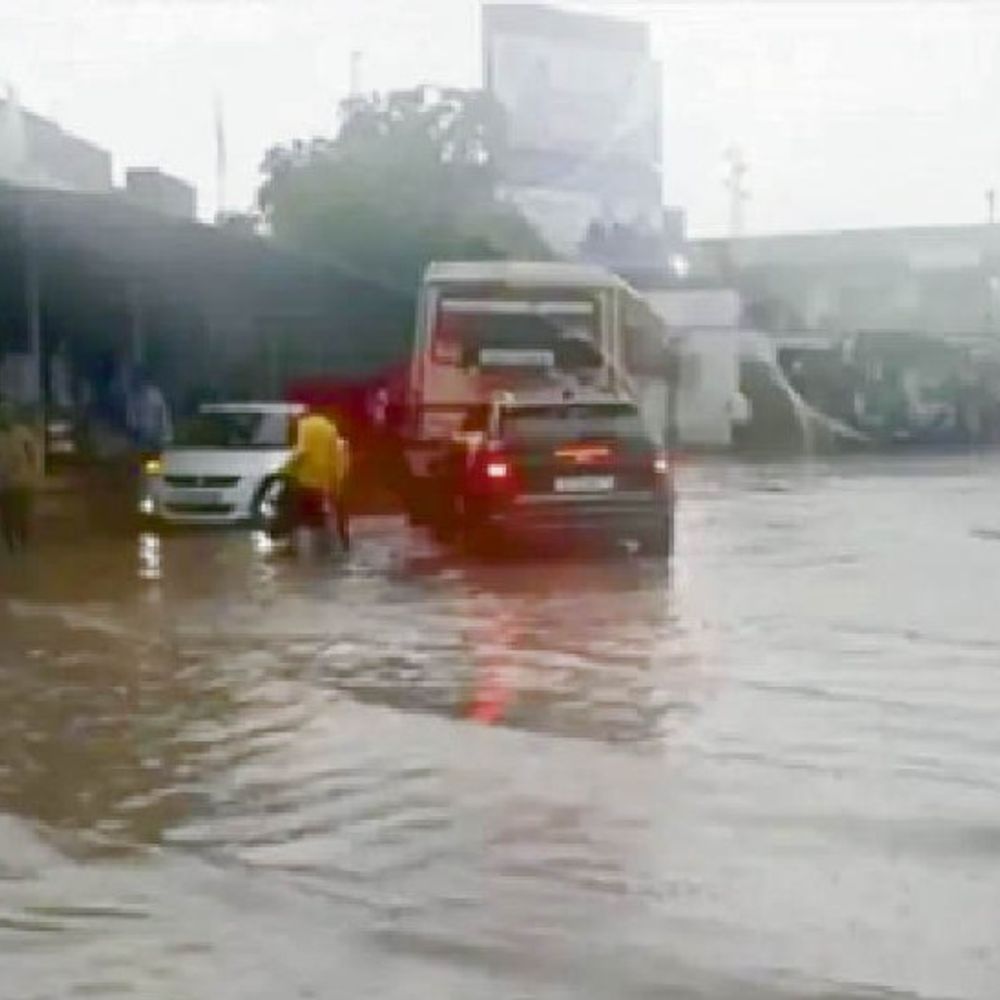 Rain continues in Gujarat since Sunday in Saurashtra and North Gujarat. On Monday, 10 inches of rain had created a flood-like situation in Umargam tehsil of Valsad district. At the same time, due to heavy rains in Banaskantha district on Tuesday, life has been disturbed. After this, after continuous rain on Wednesday, the flow of water was so fast that Ambaji started flowing even to the bikes parked on the road, which people were seen trying to catch.

Let us tell you, Gujarat has received only 42 per cent rainfall in this monsoon, due to which the water crisis in the state is deepening. At the same time, the condition of Banaskantha district is worst. Because, so far it has rained only 23 percent. But, the torrential rain that has been happening for two days has brought happiness on the faces of the people. At the same time, the crops being ruined due to lack of water have also come to life. Heavy rain continues in 14 tehsils of Banaskantha district for the last 24 hours.

One and a half inches of rain in one hour in Jasdan and Gondal
Along with North Gujarat, rain is continuing in many districts of Saurashtra. Rain accompanied by thunderstorms continued in Rajkot and Gondal districts on Tuesday night. At the same time, it had rained one and a half inches in the first 1 hour itself. It is still raining in many places. Let us inform, the Meteorological Department has expressed the possibility of heavy rain for four-five days. It has also been raining in South Gujarat for three days. This is a good situation for the farmers, as sugarcane is cultivated in many districts including Navsari. This crop requires a lot of water.

Junagadh out of drought: 9 inches of rain in 8 hours in Mangrol
After a long time, Megharaja is kind in Junagadh district since Tuesday night. Due to continuous rain for two consecutive days, life including farmers has been affected. After receiving 1 to 3 inches of rain during the night in 9 tehsils of the district, there has been about 1 to 4 inches of rain since Wednesday morning till late night. From last night till 10 am, 127 mm of rain has been recorded in Mangrol in Junagadh district and 162 mm in Maliyahati, while in other 7 tehsils one to three inches of rain has been recorded. Due to this rain, Junagadh is now slowly coming out of the drought. Keshod 38 mm, Junagadh 33 mm, Bhensan 13 mm, Mendarda 65 mm, Manavadar 11 mm, Vanthali 41 mm, Visavadar 79 mm rain.

The Israeli-Palestinian conflict: What’s happening and why are they fighting?