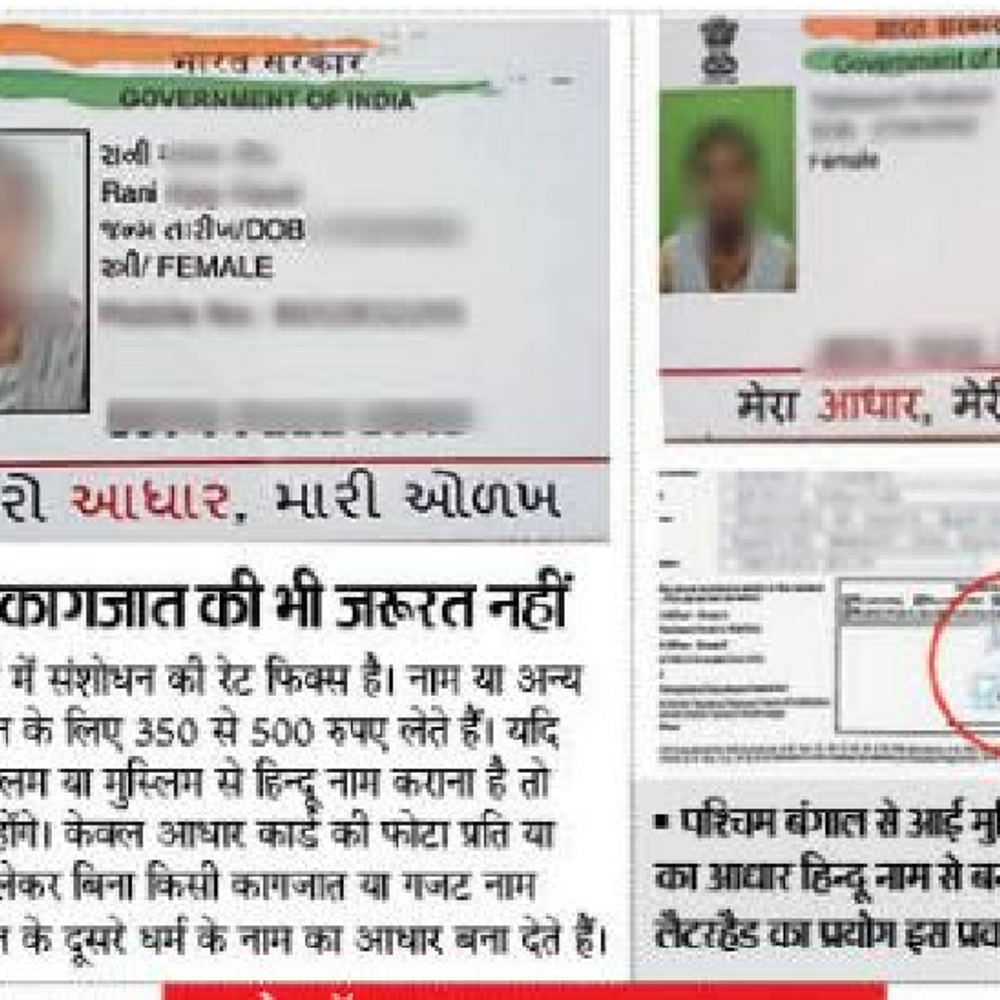 Even though the state government has implemented a law against forcible or identity-hiding conversion, but in Surat, the game of conversion is going on in Surat by breaching the unique ID Aadhaar portal of the central government. The name of the person is changed by amending the Aadhar card without any legal documents. For this purpose the brokers have prepared a rate list. Give money, change gender, caste, religion. Not only this, such a case has also come to the fore, in which a girl got married to a youth of another religion after converting her religion in the Aadhar card.

After getting information about the conversion of religion through Aadhar card, Bhaskar did the investigation. In which it was revealed that this game of conversion is going on at an Aadhaar center authorized by the Central Government. Where the change in the Aadhar card is done by writing an application on the letterhead of the MP, MLA and Councilor. Center converts Hindu to Muslim and Muslim to Hindu.

Aadhar card gang also makes Aadhar card of foreign nationals. Bangladeshi infiltrators and minorities coming from West Bengal make Aadhaar cards in Hindu names. The Bhaskar reporter made a deal to change the Aadhar card by talking to the Aadhar card center operator on the phone.

Excerpts from conversation with Aadhar center employee
The Bhaskar reporter sent a copy of the Aadhaar card of a Muslim youth to the Aadhar card center operator after the deal was settled over the phone and asked him to make Aadhaar with his Hindu name. The center operator agreed to make Ajaz’s Aadhar card with the Hindu name Ajay for Rs 3000. Bhaskar has all the facts including the call recording.

Reporter: I want to make some Aadhar cards. Some names have to be changed too. Employee: Yes, will be

Reporter: What is your charge for this?
Staff: What proof do you have? Whose name to change? Yours or someone else’s?

Reporter: I have a relative, he has just come from the village. Employee: But who gave you my number?

Reporter: My friend has given it if you can, it is fine otherwise it doesn’t matter. Employee: That will be no problem. Photo ID is required to change the name.

Reporter: No document. Only house rent agreement will be available. He will get his Aadhar card. Employee: Okay. Will be done. 350 will be charged for this.

Reporter: Muslims also have the same charge from Hindu that it is different?
Staff: It has a separate charge. Just like there are Nepali people, they are from Bengal, they are charged up to 3 thousand.

The color of Ganeshotsav is fading: From soil, bamboo, grass to labor, expensive, two-foot Ganesh idols are being sold for up to Rs.3,500